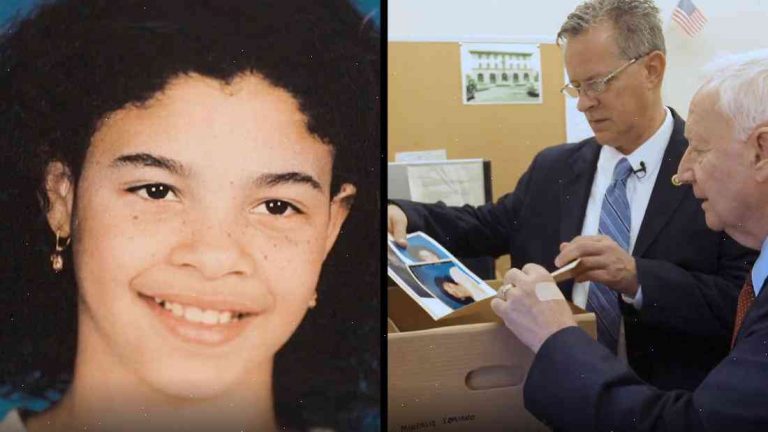 In February 1993, Gillian Hodgson and her 13-year-old friend Laura Wake were walking along the seafront at Wunstun in Skegness, Lincolnshire.

A white van passed on the seafront path, and the van driver hit the girls from behind.

The girls fell to the ground and one of them, Laura, suffered serious injuries to her head.

The white van drove away and Laura’s parents reported her missing.

A few days later, police arrested Paul Pendrill, then a 22-year-old farm labourer, who was wearing a bright jumper that was similar to those worn by Laura that day.

According to police, Paul Pendrill did not make a full confession to the crime, and he was subsequently acquitted of both the murder and possession of child pornography charges.

But in 1995, after making progress in the case, detectives appealed to the public for information.

Days later, police made an unexpected breakthrough. Paul Pendrill called a relative and told them his name was Tony.

Image copyright PA Image caption Paul Pendrill was put under house arrest, but continued to receive benefits until his arrest in 2008

However, the calls weren’t from Tony Pendrill – they were from Paul Pendrill, telling his relative that he was the killer.

Police then launched Operation Westend and quickly tracked down Tony Pendrill, then a 26-year-old carpenter.

When confronted with evidence from the investigation and his licence to drive a car at that time, police arrested him and put him under house arrest for five months.

During that time, new details surfaced, and Paul Pendrill quickly confessed to having sex with Laura in November 1993.

After questioning, Paul Michael Lyons, a 25-year-old former power station worker, admitted to being behind the wheel of the van that night.

He was found guilty of Laura’s murder and was jailed for life.

Laura’s family called for the police to investigate other people in relation to the case, however they chose not to pursue any further investigations.

On Tuesday, 22 years to the day after Laura was found dead, police made an arrest that has created history.

Julia Culleton, 45, from Lincoln, was arrested on suspicion of murder.

She is being held in custody.

Ms Culleton lived in the same close-knit community as the Wake family.

She is suspected of lying to detectives in the early stages of the investigation.

Police are still appealing for anyone who knows anything to come forward.

Officers have also issued a picture of the grey Vauxhall van they believe killed Laura.

This van, with a distinctive white stripe running up the middle of the car, was spotted in Skegness on the evening of 29 February 1993.

Anyone who can identify the van or remembers seeing it on that night is asked to contact Lincolnshire Police.

Image copyright PA Image caption Mr Pendrill was sentenced to life for the murder, plus 26 years

You can hear more about this case here.

Find out more about our justice centre: Investigation Hub