What had you thought about your first marathon before you made the all-important team of 11 that would hit the pavement? Annie Frisbie: I really never knew what it was, so I was thinking,… 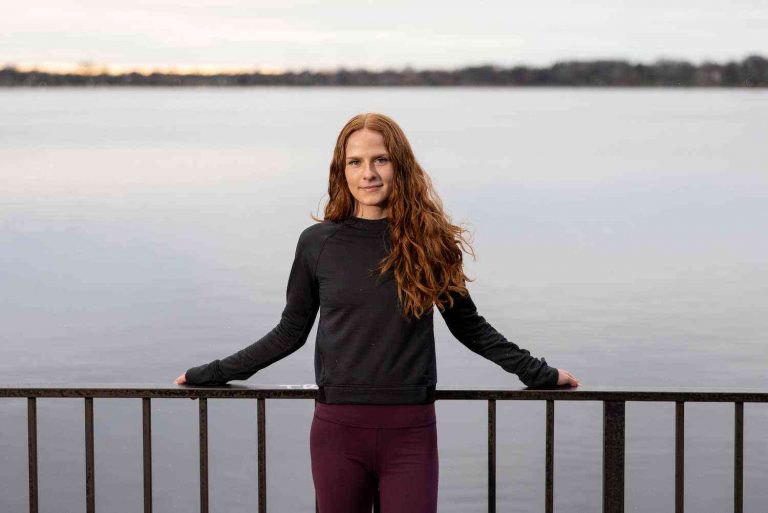 What had you thought about your first marathon before you made the all-important team of 11 that would hit the pavement?

Annie Frisbie: I really never knew what it was, so I was thinking, I don’t know, I can’t imagine what the longer mile race would feel like. I thought to myself, wait, that doesn’t feel the same as doing a 10K. But getting out there and following your own pace is a bit different than saying, I’ll just run with these people and continue to run at a pace that has given me joy in the past.

How did you explain to people in your group your coming to the marathon from just doing a five-kilometer run?

Frisbie: Well, I didn’t tell everybody I just did a 5K. … A lot of people were surprised to find out that it wasn’t, you know, a half marathon or a full marathon. So, there were a lot of people there who didn’t know what to think.

You and your husband Jeremy led the pre-marathon stretch in Kettering, Ohio, together. What was the power of that moment?

Frisbie: When Jeremy, just ran with me, first in the knee-length thing, and then toward the finish, we ended up with a full-length braided wig [Susan’s running number]. We started joking and saying, “Nah, that’s silly.” But I’m used to being a little bit slower than him so I think I got that kind of sympathy from the other runners.

Did you have any ideas about how you wanted to run? Did you draw up a topography?

Frisbie: I was just along for the ride. I wasn’t thinking too much, and I know Jeremy did as well. Once we kind of went off the bike path, we just kind of mixed it up and to hell with what everybody else thought.

Did you have any specific training plans?

Frisbie: I have a long list of planned runs, but the first one was a priority for me, because this week is my vacation week. So I’m just enjoying being out of the office for five days before it all starts again.

Did you have goals in mind?

Frisbie: I do. I have a little house in Laurel and I’m trying to build the foundation there and even though the marathon doesn’t start until next Monday, I still want to get some groundwork laid. It’s all part of really trying to get organized as well as very physically ready for the marathon.

What does your husband think about you doing the marathon?

Frisbie: He’s very excited. I feel like I can’t ask for much more.

What does this experience mean to you?

Frisbie: This is a leap. And it’s such a little-understood challenge. I don’t know if it’s even really a challenge. I’m so used to being free and uninhibited that it’s very, very freeing to be a part of a whole organization. … I mean, you get to see a lot of people who really don’t talk to each other, and they’re brought together in this community where they’re not fighting over stuff or, you know, thinking about other people. I really enjoy that aspect of it, and you get to be a part of that community.”

Note: This post has been edited to correct Frisbie’s birth year.

Making Sense of Erica and Ben’s Secret Friendships on “UnREAL”

Jhumpa Lahiri to Appear on WAMU’s “This American Life”