Charlie Chaplin and his sisters Mary and Trisha at a holiday camp in the north of Ireland in 1937 The rugged terrain, exotic locations and the motto – Keep Waterville Weird – must be… 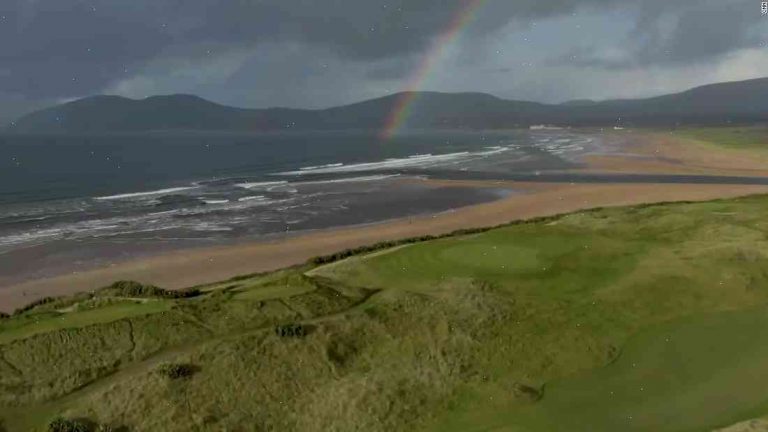 The rugged terrain, exotic locations and the motto – Keep Waterville Weird – must be on the list of reasons why Hollywood star Charlie Chaplin spent every year in the north of Ireland.

In 1937, the star of the movies Modern Times and the Great Dictator spent his winter holiday at Waterville Golf Club, currently the biggest hotel and golf complex in Ireland.

Around 600 people live at the former mountain army camp in Achill Island but it was almost 100 years ago when Chaplin would spend every winter there, just over the border.

“The appeal for Charlie Chaplin is the mist,” explained Dr Anne Jones, who is part of the team at the Sledige Heritage Project.

“It’s very strange. I think he could get away with it if he lived in London, or New York or somewhere.

“Waterville was somewhere to escape to and he would just spend his whole winter there, quite strangely, and never came back to his wife. He was certainly at one with the scenery.

“He was well away from Hollywood and I think it was a nice change for him, if he wasn’t there. It was very beautiful up there.

“He came back every year because of what was on offer there, just how different from London he was going.”

The archives we are working on at Sledige Heritage are being particularly useful in getting in touch with lots of different people who experienced the world of Charlie Chaplin – those who worked with him, those who were well acquainted with his company and those who were merely fans.

And as we embark on a project to document the life and times of the wild and wonderful Celtic Isle, it has been particularly enjoyable listening to the stories of him being a regular at Waterville – in almost every year!

There have been other celebrities to spend the winter in Waterville but this year marks the anniversary of the arrival of Katie Holmes – following in the footsteps of everyone from Billy Crystal to John Travolta and keeping the tradition alive.

“And Charlie Chaplin is someone who everybody knows about. It’s an amazing story and it would be fantastic to be able to celebrate that in full with everyone who was involved with that.

“It’s really a very ‘last man standing’, Irish thing. He’s an icon who connects with all different types of people.”

Perhaps it is the contrast between the gentle November sunshine in Christchurch and the high glacial heights of Achill Island, or the light mist rolling in from the Bay of Biscay, that is the catalyst for Charlie Chaplin’s love of the north of Ireland – and it surely must have rubbed off on everyone there!