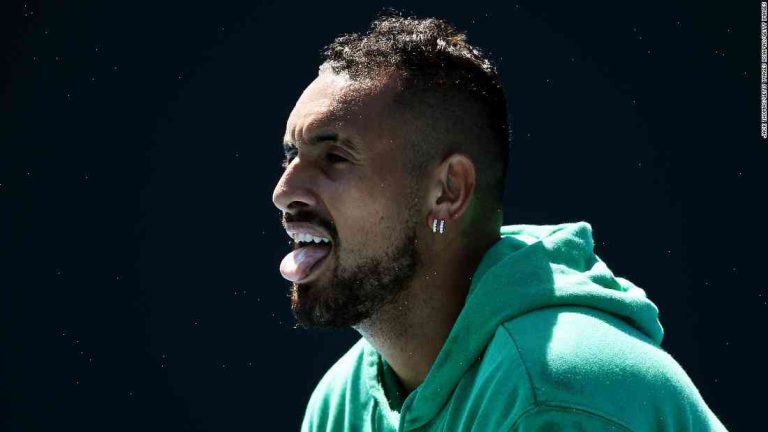 Nick Kyrgios discovered another reason to love his game and new tennis coach – rising American Steve Johnson – following his passage to the second round of the Aegon Classic.

Playing a match with many of the underlying trappings of a Wimbledon qualifier, the seventh seed kept his cool to claw back from a set down to beat the lucky loser 3-6, 7-6, 6-3 at Queen’s Club on Saturday.

Kyrgios, who hired the respected 1980s American critic of his game, Tom Gullikson, after the Miami Open last month, was merely the beneficiary of some fine shot-making from Johnson, who also gave his new coach a rousing welcome with a double-handed backhand winner down the line to open the match.

After snatching a thrilling second-set tiebreak, Kyrgios used a huge first serve and aggressive backhand to close out the second and keep the match in his favour, before saving a set point in the third.

“At the end I was just trying to keep the ball in play and serve as well as I can,” Kyrgios told the BBC. “When things started going my way I felt a lot better and it was more fun for me. There was nothing left in the tank.

“I tried not to get frustrated but obviously in matches like that it’s hard not to. I came back a bit from 2-0 down and I was 2-1 down at the net and then 2-0 in the tiebreak.”

On a day when the second seed, Dominic Thiem, and fifth seed, Karen Khachanov, were both knocked out in the first round, fifth seed Grigor Dimitrov remains one of the favourites for the tournament.

World No6 Dimitrov, who pulled out of the French Open with an elbow injury, will meet American Donald Young on Sunday.

What Democrats want Pelosi to do: Send aide out to pasture or not?