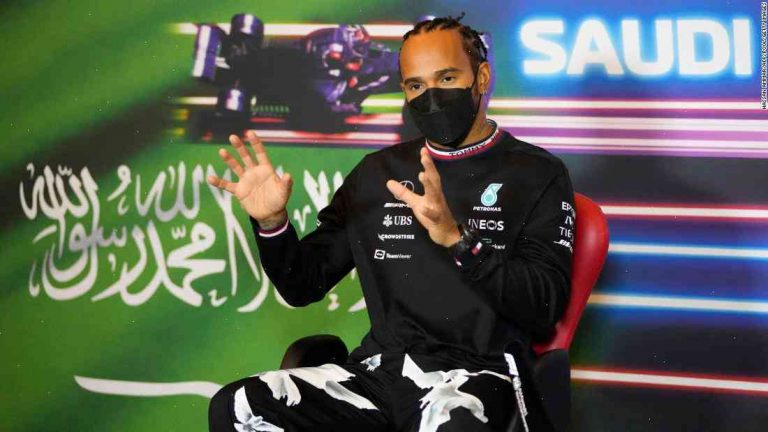 Lewis Hamilton believes he is “not comfortable” racing in Saudi Arabia after winning a controversial five-year contract worth up to £60m.

The world champion was honoured at a ceremony in Riyadh to mark his new contract with sportswear manufacturer F1 supremo Bernie Ecclestone.

But a petition started to ban F1 from racing in the kingdom after the killing of Saudi journalist Jamal Khashoggi.

“I am not comfortable racing in Saudi Arabia until a year’s gestation and conversation with them and journalists there about how to get there to the correct level of neutrality,” said Hamilton.

“You have got to talk with the people who have the power and influence on politics, religion and on society.”

Hamilton’s reasoning was shared by Sebastian Vettel, his Ferrari team-mate, and veteran F1 commentator Murray Walker, in an open letter to Ecclestone.

The 66-year-old Ecclestone had been criticised by Khashoggi’s family for a “propaganda tour” he led to the Middle Eastern kingdom in 2015, as the 15-man team were based in the US embassy while special operatives worked to assassinate the journalist in Istanbul.

In response, Ecclestone said he and Williams F1 team boss William Cowley had held discussions with the Saudis and F1’s race and commercial teams.

He said it was “unanimous that a Formula 1 race was appropriate” and that F1’s “migration here is probably the most important cultural change that we will make over the next 10 to 15 years”.

A report commissioned by the Royal Court into his murder said the reporter died as a result of a “fist fight” at the embassy, and that Saudi Crown Prince Mohammed bin Salman was not involved.

Prince Mohammed, 33, who is seen as the de facto ruler of Saudi Arabia, has so far denied any involvement.

The gruesome footage of the killing, which was seen by Donald Trump last year, led the US President to suspend Saudi arms sales.

The US, UK and EU have all demanded that the royal family give more answers.

Saudi Arabia later offered an extensive set of leaks to the Associated Press news agency, which showed the crown prince’s close relationship with Khashoggi, whom he had met on several occasions, and reports of his being given $750,000 (£641,000) by Saudi authorities.

Ecclestone has said he will not extend the suspension on US arms sales but has promised to give consideration to speaking to Khashoggi’s family.

British cyclist Sir Bradley Wiggins has also spoken out against F1’s return to Saudi Arabia, but Ecclestone has dismissed criticism that the sport would be shamed.