Astronauts aboard the International Space Station recently raised some $35,000 for charity by simply smelling the peppers of Mission Control. The signature smell of Texas-based start-up Frito-Lay — the namesake of many a Cheetos… 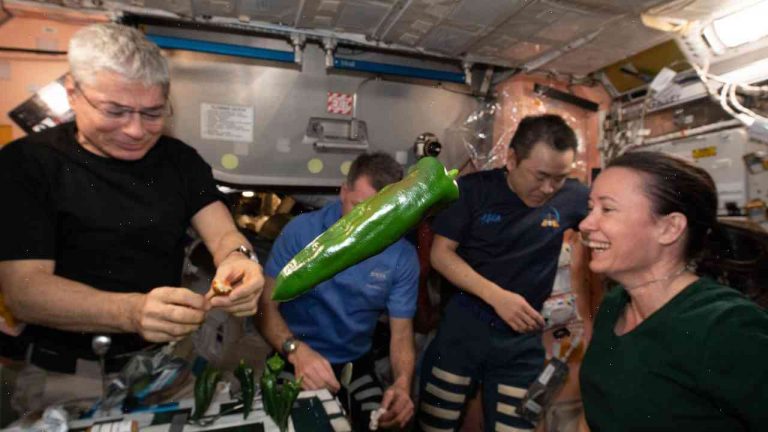 Astronauts aboard the International Space Station recently raised some $35,000 for charity by simply smelling the peppers of Mission Control. The signature smell of Texas-based start-up Frito-Lay — the namesake of many a Cheetos snack — was made possible via a special air source installed for crew reasons on the orbiting lab. Lava tubes from the space station had been vacuumed, condensed and re-injected into a special scent chamber. A one-hour blast was then used to unleash a couple of the plant compounds. Although, the scent wasn’t good enough to be called “Space Perfume.”

One astronaut named Jeffrey Williams took home the batch of hot peppers for an upcoming wedding. Ten bags were on hand for the attendants and friends of the Hawaiian-born astronaut: A shipment of 617 bags, otherwise known as “the pack,” had to be flown back to Earth. NASA astronaut Serena Auñón-Chancellor shared on Twitter that the company had learned from the experiment that because “pores are such a difficult environment to create a lengthy long lasting odor … the scent just doesn’t last very long and tends to evaporate within seconds.” Now just about everyone can smell the mood in space.

Here are the ingredients:

1 qt. sunflower seeds, mixed in a bowl with water and salt

So funny and such an amazing publicity stunt for Frito Lay’s Original Season of Lava Boxed Seasoned Harnesses. Something about @spacedoga asking the crew to smell the spices created “the perfect scent.” They also had a lovely surprise in store for astronauts -the bottled scent can’t be smelled anymore! pic.twitter.com/m6qNkACBCf — Serena Auñón-Chancellor (@AusSpacewalker) March 26, 2019

Read the full story at Mashable.